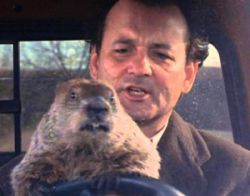 Wait, what? It’s Groundhog Day again already? Whoa. Déjà vu. Since the 1993 comedy film starring Bill Murray, it seems that Groundhog Day has become synonymous in popular culture with repetitive or routine days where the same things seem to happen over and over again. Kind of like falling into a rut in the dead of winter.

But, of course, the origins of the annual event featuring a prognosticating rodent date back hundreds of years.

The legend has it that if, on February 2nd, the groundhog emerges from his den and sees his shadow there will be six more weeks of winter. If he doesn’t, then there will be an early spring that year.

The folklore traces back to the early European settlers to North America. They brought with them the Christian tradition of Candlemas, a festival named for the custom of lighting candles on that day. The traditional saying goes:

If Candlemas be fair and bright,
Winter has another flight.
If Candlemas brings clouds and rain,
Winter will not come again.

As in the poem, the deciding factor for the groundhog’s prediction is based on the weather that day. If it is sunny on February 2nd, the furry forecaster will cast a shadow. On a grey, overcast day he won’t. Perhaps not coincidentally, crisp, clear weather in February also usually coincides with arctic air and colder temperatures. Overcast winter days are generally milder.

Of course, in Western Europe where the Candlemas lore began, winter generally ends much earlier than it does in North America. We’re far more likely to have six more weeks of winter after the beginning of February here than the settlers were used to.

Also, they had historically waited for hedgehogs to emerge from their dens to predict an early spring. Given the dearth of wild hedgehogs on this side of the Atlantic, the role was transferred to groundhogs instead. Unfortunately, most groundhog burrows are still covered in ice and snow with their inhabitants deep in hibernation in early February.

As a result, the tradition of raising a local celebrity groundhog to participate in the annual celebration was born. While Canada’s best-known groundhog weather mammal is right here in southern Ontario, Wiarton Willie, the celebration of Groundhog Day was first officially adopted in the U.S. in 1887 in the Pennsylvania German community of Punxsutawney. That town remains home to the largest Groundhog Day celebration featuring the prediction of Punxsutawney Phil.

So how accurate are the groundhogs’ predictions?

This morning, Wiarton Willie did not see his shadow, and predicted an early spring. However, rival rodent meteorologist, Nova Scotia’s Shubenacadie Sam is expecting six more weeks of winter. Pennsylvania’s Punxsutawney Phil also foresaw an early spring for this year – however, he is renowned for usually being wrong.

While the organizers of Groundhog Day like to claim that their cuddly climatologists are right between 75 and 90 per cent of the time, it turns out that their predictions are not quite that accurate. According to The Canadian Encyclopedia, a study of 13 cities over the past 30 to 40 years found that the weather patterns predicted by groundhogs were correct only 37 per cent of the time. So, they still have a better average than most television weather reports.

Regardless of the accuracy of the rodent’s ability to prognosticate the future, Groundhog Day remains an entertaining tradition in the dark of February to shake us out of our winter rut and get us all looking forward to (a hopefully early) spring.