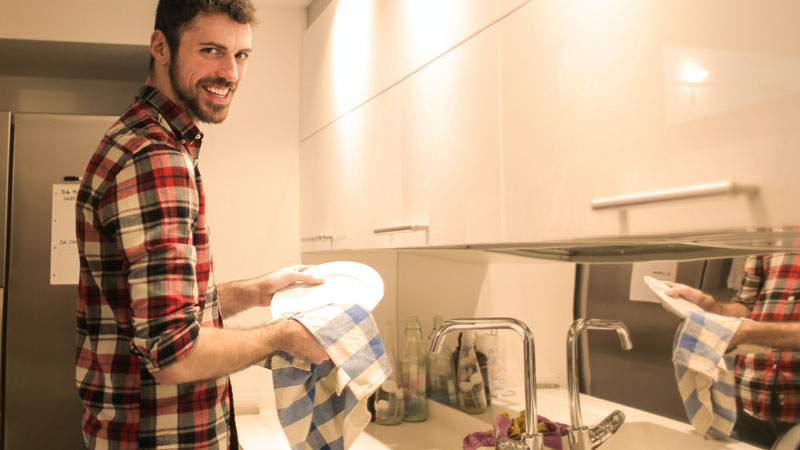 It’s a win win, really. You don’t vacuum, clean the floors, or do the dishes, and you bring home a fatter paycheque.

Well, for men anyway. Men who are in opposite sex marriages, that is. (Although, I’m not sure how happy those marriages are.) A new report has found that ‘disagreeable’ married men who don’t help out with the household chores earn more money at work.

“Agreeableness” is one of the ‘Big Five’ personality traits that psychologists measure to define human personality types. (These are openness to experience, conscientiousness, extraversion, neuroticism, and agreeableness.) People with a high degree of agreeableness tend to be friendly, sympathetic, kind and cooperative. On the flip side, disagreeable people tend to be less warm and more self-interested and competitive.

Those are traits that can naturally lead to more success at work.

“Across two studies, we find evidence that disagreeable men tend to earn more money relative to their more agreeable male counterparts because they are more self-interested and less helpful to their wives at home, which allows for greater job involvement and, ultimately, higher pay,” said lead author, Brittany Solomon. “This effect is even stronger among disagreeable men with more traditional gender role attitudes and when their wives are highly conscientious, presumably because in these cases their wives take on more household management and more seamlessly carry out the responsibilities.”

The study suggests that because these men are able to spend less of their time and energy helping out around the home, they can invest these resources into their work for a bigger financial payoff.

Interestingly, the research found that similar disagreeableness does not predict career success for more men in more egalitarian marriages, those whose wives are less conscientious, or any men outside opposite-sex marriages. So, for in order to receive the financial benefits of shirking the chores and throwing your disagreeable self into your work, you need to have a supportive wife, who is willing to put up with your disagreeableness and pick up the slack at home.

So, basically the 1950’s all over again. Solomon concludes, “Professionals often publicly thank their spouses when receiving achievement awards or earning promotion, and, at least for disagreeable men, our findings quantify the truth behind this sentiment.”

Does just being disagreeable alone give you an advantage in the workplace? Science has the answer.