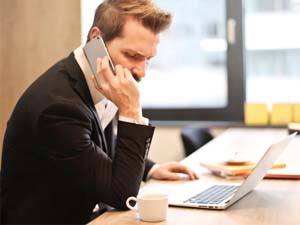 When I moved into a new house just over a year ago, I changed internet service providers. Because I was signing on as a new customer, they offered me a reduced price, limited time offer. It was a great deal.

Too good to last, of course. Cut to a year later, and I got the call. The call that proves the cable companies think we are possessive, lazy, easily tempted, and kind of stupid.

Here is how it went.

The representative from the internet service provider began by telling me that my deal had expired, but not to worry, they were prepared to offer me a package that was almost as good.

They would keep providing me with high-speed unlimited internet for only a little bit more that I was currently paying – if I would sign up for their cable TV service as well.

I pointed out that I have never paid for a cable package, and I don’t watch television. (I do watch things on television, but I stream everything. I watch more YouTube than anything else, but even for series and movies, I prefer the freedom and flexibility of choosing what to stream rather than seeing “what is on” at any given time.)

Here’s where it gets real. The guy from the ISP said that he understood. They could work with that. I could have the internet deal if I accepted their cable box into my house. I didn’t even have to hook it up or plug it in. I just had to keep it in the house for at least three months. During which time, I would not be charged for the rental or any TV service. After the three months, I could feel free to return it to any of their stores, and I would still keep the lower internet price.

Here are the problems with that deal

First off, that is really annoying. They’re assigning you a chore. Three months from the start of the agreement, you have to trek out to one of their shops, wait in line, fill out some paperwork, and return the stupid box you never wanted in the first place.

Secondly, it’s insulting. Why would they offer you a lower price on the service you actually want if you keep this box for a period of time? Because they don’t think very highly of your character.

They think you are lazy. The ISP assumes you will never get around to returning the box. Once it is in your house, it’s there to stay. So, after three months, you’re going to start paying for the rental.

They think you are grasping. Once you have this shiny piece of technology, even though you never wanted it, you will not want to give it up. It’s mine now!

They think you will get hooked. Once the box is in your house – and since you have to keep it for several months anyway – you’re probably going to try it out. Wow! TV! Suddenly their channels are beaming into your set. You don’t have to go to streaming service and select what to watch. Varieties of content – news, talk, sitcoms, reality tv, sports – broadcast right into your home 24/7.

Entertain me. Mesmerize me. Anesthetize me. You’ll be paying for the TV service in no time.

No. No, I said to the guy on the phone. I won’t keep your TV box in my house for three months or for any time at all. I don’t want it, and if you send it to me regardless, I am going to smash it.

I’m in marketing. I communicate for a living. Here’s a sales tip for the big ISPs: tricking and insulting your customers isn’t the way to win consumer loyalty. We’re not the greedy, lazy, sheep that you think we are.